Add to the gin fund! 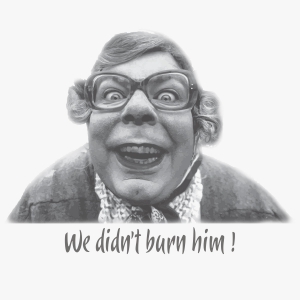 ….says the intrusive ‘cookie consent’ popup which requires me to navigate through various pages, puzzle out the jargonerics and fiddle with settings before I can access the content I actually want to read on the site.

Here’s the thing. If your website is infested with trackers, if you are passing my data on to third parties for profiling and analytics, if your privacy info gets a full Bad Privacy Notice Bingo scorecard, then you DON’T take my privacy seriously at all. You have deliberately chosen to place your commercial interests and convenience over my fundamental rights and freedoms, then place the cognitive and temporal burden on me to protect myself. That’s the opposite of taking privacy very seriously, and the fact that you’re willing to lie about that/don’t understand that is a Big Red Flag for someone like me.

END_OF_DOCUMENT_TOKEN_TO_BE_REPLACED

Sometimes it feels like an uphill struggle, bringing data protection good practice to the masses. Sometimes it feels like an vertical climb up a razor-wire-covered fortress turret while hostile archers fire flame-tipped arrows down at you from overhead. I confess that sometimes I am a little short on patience and tolerance (although I try hard not to let it show!) and I do spend quite a lot of my time with gritted teeth and clenched fists. I’m probably not the only one – which is why I wrote this blog post. Despite my naturally sarcastic tone, the sentiment is genuine – and hopefully contains at least one nugget of actual good advice.

Take care of yourselves, don’t be ashamed to reach out for help when things get on top of you, and remember that come the Zombie Apocalypse; your survival will not be based on how successfully you got an organisation to implement data protection!

END_OF_DOCUMENT_TOKEN_TO_BE_REPLACED

At some point, I’m going to try and make a privacy notice delivered through the medium of internet memes. While playing about with the possibilities of this, I got totally sidetracked and ended up data-protection-ifying a load of popular memes for my own nerdy amusement.

Here are the fruits of my misdirected labour. I think I might need to get out more

END_OF_DOCUMENT_TOKEN_TO_BE_REPLACED

Previously, I’ve introduced the concept of the “just culture” and explained the basic principle. In this blog post I will look at the types of behaviour that give rise to incidents and how, in a just culture, these would be addressed.

Hands up if you’ve ever done any of the following:

Did it seem like a good idea at the time? (You can lower your hands now, by the way) Perhaps you were under pressure to get work done to a deadline, or maybe you couldn’t afford the cognitive effort of considering security policies at the time. These types of “incidents” occur every day, all over the place and in most cases they do not result in disaster – but one day, they could…and unfortunately, in most corporate cultures the blame will rest on the person who didn’t follow the policies.

In a just culture, blame is not appropriate and punishment is only reserved for a minority of behaviours – those which were driven by malicious intent or deliberate and knowing recklessness. None of the activities listed above really fall into that category and so even if they did result in major data leakage, disruption or loss; should not be responded to with punitive action – especially if everyone is doing the same but getting away with it. The sysadmin who runs a private file-sharing server on the corporate network, or the manager who illegally snoops on their staff’s emails should be punished – not those who are just trying to get on with their jobs.

Most incidents arise from “risky behaviour” rather than malice or knowing recklessness. Risky behaviour falls into two main categories:

These behaviours should not be treated the same way, for that would be unjust.

In the case of 1), the appropriate response is consolation and a review of controls to identify whether there are any areas which could benefit from additional ‘sanity checks’ without making it too difficult for people to get their jobs done. Humans are imperfect and any system or process that relies on 100% human accuracy is doomed to fail – this is a design fault, not the fault of the errant.

The second type of behaviour is more challenging to mitigate, especially since human beings are generally rubbish at assessing risk on the fly. Add in cognitive dissonance, conflicting priorities and ego and you end up with the greatest challenge of the just culture!
Explaining the reason that the behaviour is risky, pointing out the correct approach and issuing a friendly warning not to do it again (OR ELSE) is the appropriate and fair response.

So how in general should risky behaviour be prevented? Education is the foundation here – not just a single half-hour e-learning module once a year, but frequent and engaging discussion of infosec risks using real-life anecdotes, analogies, humour and encouraging input from all.

On top of the education programme; there needs to be a candid look at business process, systems, procedure and tools – are they set up to make risky behaviour the path of least resistance or do they encourage careful thought and good habits?

Monitoring and correcting behaviour comes next and it is critical that this be done impartially and with as much vigour at senior levels than for front-line and junior staff. If the C-suite can flout policy with impunity then not only will you struggle to achieve a successful just culture, but you also have a gaping big hole in your security defences.

A just culture relies on robust procedures, a series of corrective nudges and above all, consistency of responses in order to be effective. Far too often, individuals are thrown to the wolves for simply getting unlucky – forced to use non-intuitive or badly-configured systems, under pressure from management above, with inadequate resources and insufficient training, they cut the same corners as they see everyone else doing – and pay the price of the organisation’s failures.

Next time: building a just culture in a pit of snakes*

As I noted in last week’s blog post, the phrase “human error” covers a lot of ground, and fails to distinguish the causes of errors from each other; thus not being terribly helpful in incident analysis, being a generic statement of “something happened that wasn’t supposed to”.

The “something” may cover a number of scenarios, behaviours and motivations but to unpick an incident and protect against further occurrences, the conditions and actions do need to be examined, because it is those which determine the appropriate response. This is where a “Just Culture” comes in.

For those of you not familiar with the phrase, the term “Just Culture” arose from the work on aviation safety by Professor James Reason in the late 90s and early 00s. Professor Reason recognised that fear of a punitive reaction to human error is likely to discourage reporting of incidents, whereas it would be more advantageous to foster  “an atmosphere of trust in which those who provide essential safety-related information are encouraged and even rewarded, but in which people are clear about where the line is drawn between acceptable and unacceptable behaviour.”

There is much written about the principles and practices of a Just Culture, which has been adopted in many safety-conscious industries, including transport, construction and healthcare which I will refrain from regurgitating (if you’re interested, see the links at the end). My putpose here is to generally have a bit of a moan about how far the information security industry has lagged behind in adopting a similar position, and how personally, I think it’s time we caught up.

When individuals are afraid to report information security risks and incidents for fear of ‘getting into trouble’, apathetic resignation to broken systems and processes or simply because they don’t recognise a problem when it arises, those risks and incidents will not be managed – increasing the likelihood that they will accumulate to the point of causing serious damage or disruption.

Security policies and procedures are routinely breached for various reasons – they fail to reflect the needs and risk appetite of an organisation, they are difficult to find or to understand, or they demand a higher level of technological capacity than the organisation can muster. If the only time that these breaches are identified is when the consequences are adverse -and the outcome of such occurrences is that individuals are punished for being ‘caught out’ by doing what they see everyone else doing – then human nature being what it is; more effort will go into concealing the instances of policy breach than the rectification of the core problems that cause the policy to be breached, and breaches will continue to occur.

However, simply enforcing reporting of breaches and incidents won’t, on its own, result in any meaningful change if the root causes of incidents aren’t analysed and treated. In my next blog post I will look a bit deeper into the analysis of incident causes and the behaviours that contribute to their occurrence.

Hello. I use privacy-friendly analytics (Matomo) to track visits to my website. Can I please set a cookie to enable this tracking? I’m afraid that various plugins and content I have on the site here also use cookies, so a ‘yes’ to cookies is a ‘yes’ to those too. Please have a look at my Privacy Info page for more info about these, and visit my advice page for tips on protecting your privacy online